Advance chapter: The role of transnational corporations and extractive industries in seabed mining, and the impacts on oceans health and food security 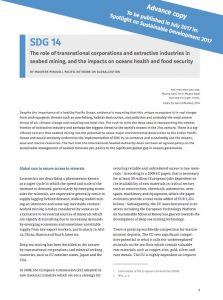 Intro: Despite the importance of a healthy Pacific Ocean, evidence is mounting that this unique ecosystem is in real danger from anthropogenic threats such as overfishing, habitat destruction, and pollution and probably the most severe threat of all, climate change and resulting sea level rise. The rush to mine the deep seas is representing the newest frontier of extractive industry and perhaps the biggest threat to the world’s oceans in the 21st century. There is a significant concern that seabed mining has the potential to cause major environmental destruction to the entire Pacific Ocean and would seriously undermine the implementation of SDG 14, to conserve and sustainably use the oceans, seas and marine resources. The fact that the International Seabed Authority does not have an agreed policy on the sustainable management of seabed minerals yet, points to the significant global gap in oceans governance.

The full report will be available from July at https://www.2030spotlight.org

Recording: Launching event of the Spotlight on Susainable Development 2020

On the eve of the (virtual) United Nations 75th anniversary event and the Global Goals Week, authors presented this year’s global civil society report Spotlight on Sustainable Development. With this virtual launching event that took place on 18 September 2020, we presented key findings of the report.

If you missed it, you can watch the recording on youtube now.

REINFORCING the shift
towards climate justice

Climate change impacts are now undermining and will pose significant constraints on meeting sustainable development and poverty eradication in many developing countries due to the loss and damage that they bring to critical economic and human infrastructure but also to the long-term shifts in economic production that they will entail.

The COVID-19 crisis and the worldwide measures to tackle it have deeply affected communities, societies and economies around the globe. COVID-19 is a global wake-up call for enhanced international cooperation and solidarity.

But calls for “building back better” by just pushing the reset button will not change the game. We need structural changes in societies and economies that ensure the primacy of human rights, gender justice and sustainability.

This is the key message of the 2020 edition of the Spotlight Report on Sustainable Development “Shifting policies for a systemic change.” The report unpacks various features and amplifiers of the COVID-19 emergency and its inter-linkages with other crises.

Multilateral solidarity is gaining traction as the slogan for mobilizing support for international cooperation and for the UN. Is it replacing or merely renaming cross-border obligations – many of which have been enshrined over decades in UN treaties, conventions and agreements, and the principle of common but differentiated responsibility in their implementation?

Why do we seek another name at this time? It seems that reaffirmation is less attractive than invention in this time of innovation, short term thinking and results measurement and messaging via social media and 280 characters. How should it be reinvented?

Solidarity assumes trust and common responsibilities. Reinventing multilateral solidarity must start with bending the arc of governance back again – from viewing people as shareholders – to stakeholders – to rights holders.