Technocratic Fiddling While the Planet Burns: Towards a Higher Level of Ambition for the HLPF

The 2019 High-Level Political Forum on Sustainable Development—the global platform for reviewing progress on the SDGs—took place last week at the UN in New York, and in general terms, it was more of the same. Admirable rhetoric, but not much evidence of serious efforts at comprehensive implementation, and a host of major flaws and limitations to contend with. As CESR has observed at previous HLPFs (see 2017 and 2018), the space given to civil society is far too limited, most of the Voluntary National Reviews feel very disconnected from reality, and one leaves with the feeling that most governments are at best timidly tinkering around the edges, making minor adjustments to business-as-usual while the planet burns.

There were, however, three elements that made this year’s HLPF somewhat distinct. First, inequalities were under the spotlight, given that Goal 10 (“reduce inequality within and among countries”) was up for special review for the first time, and the overall theme was “Empowering people and ensuring inclusiveness and equality.” Goal 10 had been given scant attention at the HLPFs so far—an analysis of the 2018 VNRs by the Committee on Development Policy confirmed that SDG10 received the fewest mentions, for example. So 2019 was an opportunity to bring inequalities to the forefront and honestly grapple with the implementation challenges.

There was widespread acknowledgement that most countries are way off-track with regard to tackling inequality, and in many areas we are in fact moving backwards—with regard to wealth and income inequality, but also with the frightening growth of xenophobia and discriminatory attitudes towards migrants, as well as backlashes to the rights of women and LGBTQIA+ people. However, there was little insight in the official sessions as to the real obstacles to making progress on inequality—corporate and elite capture, vested interests, lack of political will and failures of global economic governance. As the Pathfinders “challenge paper” makes clear, we already know what policies work—the problem is that those measures are not politically palatable to those wielding power. For instance, in the official session on Goal 10, there was plenty of rhetorical agreement on the importance of progressive fiscal policy—but when States lined up to dutifully tell the world what they had done to tackle inequality, the word “tax” had somehow disappeared from their vocabulary. Meanwhile, Goal 10 commitments regarding human rights and discrimination were also largely overlooked in the discussion.

Indeed, the most concrete, grounded and strategic discussions about the impacts of inequality, its drivers and remedies took place outside of UN premises, for example, at the launch of the civil society Spotlight Report, and CESR’s “Time to be Bold” event with Oxfam, Fight Inequality Alliance and others. Another event co-hosted by Civicus, CESR and others made brutally clear that the interconnected fights against extreme inequality and climate catastrophe cannot be won while human rights and environmental defenders are being silenced, threatened and jailed. Yineth Balanta, an Afro-descendant activist and environmental defender from Colombia whom CESR helped bring to the HLPF, spoke powerfully about her community’s experience of standing up to extractive industries. Meanwhile, governments such as Egypt were given UN space—and the legitimacy of co-hosting UN agencies—to hold forth on how they are tackling inequality, while arresting human rights defenders and other dissenting voices back at home.

Second, this was the end of the initial four-year cycle of the HLPF, with “reform” of the HLPF and its modalities now on the table for discussion. In terms of quantity of engagement, the HLPF has been a big success—with over 140 VNRs presented, and large governmental and civil society delegations attending. However, the quality of engagement exhibits the same serious flaws as in 2017 and 2018. Different proposals are being floated now for meaningful reform. 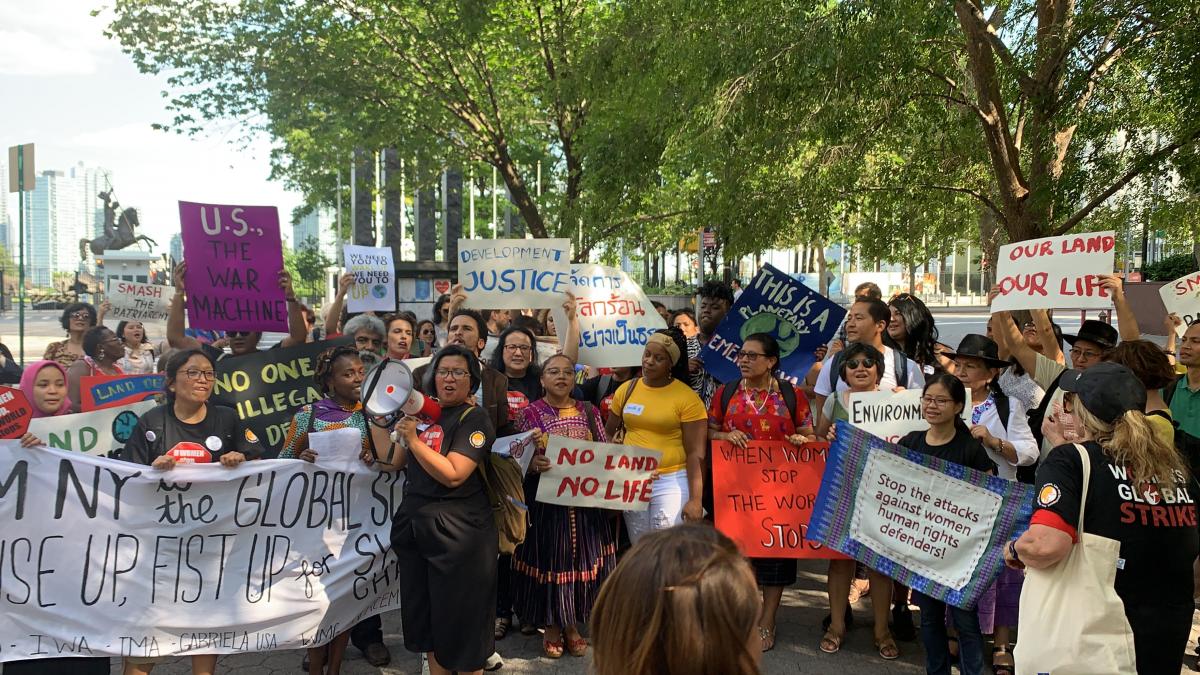 From CESR’s perspective, there are a number of indispensable measures to be taken if the HLPF is to grapple more seriously with the challenges of the SDGs. For example, not only should there be more time for VNRs (half an hour per country including questions is grossly inadequate), but there should also be a requirement to hear at least two civil society responses. Similarly, national civil society shadow or “spotlight” reports must be given formal status as official contributions to the HLPF, as in the UN human rights monitoring system.  The three-hour goal-specific panels reinforce unhelpful silos, so should be replaced with discussions that tackle major cross-cutting challenges affecting multiple SDGs and requiring transnational cooperation and solutions. Discussions around debt, the global tax system, conflict and militarism, migration, climate change mitigation and adaptation would be a far better use of time at the only global space designated for discussing progress and setbacks on the 2030 Agenda. However, given the vested interests in the status quo, and the preoccupation of key UN agencies with sheer volume of engagement from Member States, it unfortunately seems unlikely that the “reforms” will amount to anything very radical.

A third observation from the 2019 HLPF is the increasing recognition of the intersections between human rights and the SDGs, at least by UN figures and civil society. The 2030 Agenda is formally underpinned by the Universal Declaration on Human Rights and other international human rights treaties. As CESR’s executive director, Ignacio Saiz, argues in the Spotlight Report, human rights obligations should therefore be indispensable guideposts to implementation. However, we are still seeing a very wide disconnect, despite the efforts and exhortations of the High Commissioner for Human Rights, her staff and civil society. For example, South Africa presented a VNR this year, but made no reference to the detailed SDG-related recommendations resulting from its review a few months ago by the UN Committee on Economic, Social and Cultural Rights (CESCR), such as making fiscal policy more progressive and increasing spending on health, education and social protection. It fell to civil society to remind the government of the relevance of CESCR’s recommendations and the country’s human rights obligations, done with a powerful statement from the floor and a written submission from CESR, SECTION 27 and Institute for Economic Justice.

Of course, integrating human rights in SDG implementation is about far more than just pointing out relevant treaty body recommendations. It cannot be reduced to a technocratic or depoliticized exercise of cross-referencing. Human rights should inform and enliven our understanding of SDG commitments like “Leave No One Behind”  and “policy coherence.” They should help draw normative red lines around governmental discretion and navigate trade-offs and competing interests. Human rights enable us to spell out the binding duties to which States, international institutions and powerful non-state actors should be held accountable in their sustainable development efforts.

For advocates, there is a difficult balance to strike between pragmatism and integrity—as we try to convince States that their human rights obligations mean something very immediate to SDG plans and processes. However, the inconvenient truth is that meaningfully aligning sustainable development practice with human rights is not easy—if it is, you’re almost certainly doing it wrong. It should be awkward and challenging to those in power. Dismantling power hierarchies, systemic inequalities and structures of oppression are at the very heart of human rights law and practice. That is exactly why it is so crucial to embrace them if we want to see SDG implementation become truly transformative and move decisively away from the business-as-usual status that was so evident at this year’s HLPF.

All photos from the Ground Level People’s Forum, July 14, 2019, a counter-space to the UN HLPF bringing together civil society and peoples’ movements focused on resistance and holding governments accountable for sustainable development commitments. Courtesy of Sergio Chaparro.

“Technocratic Fiddling While the Planet Burns: Towards a Higher Level of Ambition for the HLPF” was originally published 26 July 2019 by the Center for Economic and Social Rights (CESR) at http://www.cesr.org/technocratic-fiddling-while-planet-burns-towards-higher-level-ambition-hlpf.